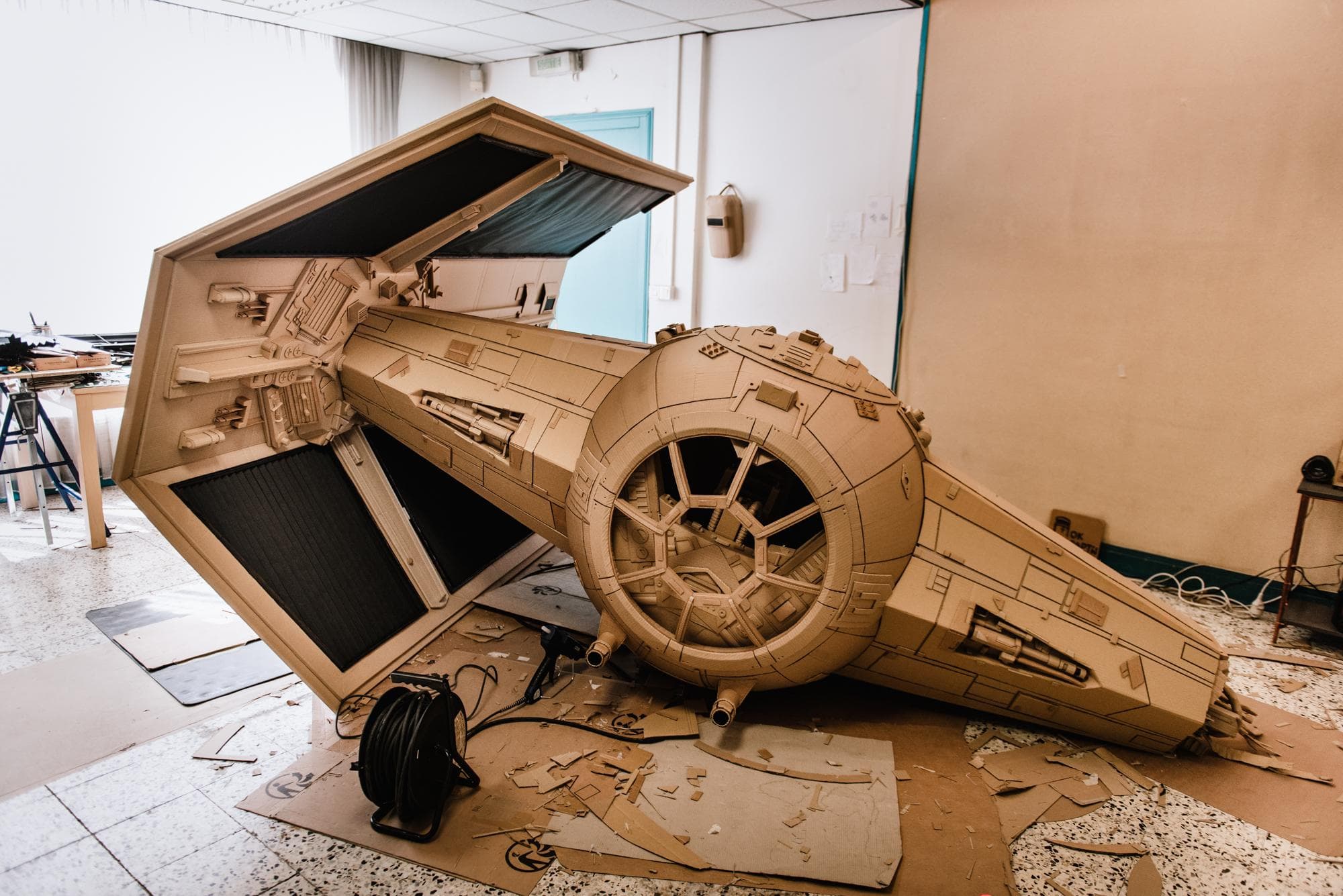 Many weeks have passed since the last official news from BODOC. A most complete confusion was in the air of the peaceful Alfortville, nearly calling for intergalactic help in front of the out-of-scale proportions of the events. But let’s come to the main points: the report requested by Vader couldn’t conclude on the root causes that led to the partial destruction of the spaceship. BODOC, who wasn’t declared innocent either, couldn’t obtain a coin from the imperial insurance nor his final retribution. However as a consequence of an unexpected blank in his contract, he was granted the ownership of the spaceship.

In the middle of a sonic wind propelled by the Workshop imperial sound system, BODOC was gazing at the living painting he witnessed many times: the light sweeping the double-fluted floor, while he was working during all these days on new creations that sprouted here and there. They formed a good company, as his whole team took an undetermined leave following the adventures that stormed the place. At the precise moment his vision came to the spaceship, his binocles seemed to twist into a troubled shape, as a mirror of his inside feelings: here was kind of a wait - what for ? He was unable to tell. This corrugated giant with the 7 kg glue was sleeping there, quietly.

All of a sudden, a peculiar tension filled the air, cardboard dusts swirled around while a little point appeared from the sky. It got closer up to reveal a small droid from the Space Posts Services. “By my binocles, a letter!” he shouted internally out of surprise.

The holo-tweet couldn’t be straighter to the point, it showed a tiny trumpet announcing:

From November 27th till December 19th at the Espace Culturel Decauville of Voisins-Le-Bretonneux, France Blip

The theme will be: VOISINS STRIKES BACK Blip
Official invitation attached; please share your answer within no delay Blip

A card mentioned “INVITATION” with the name of BODOC; on the flip side, the event poster: 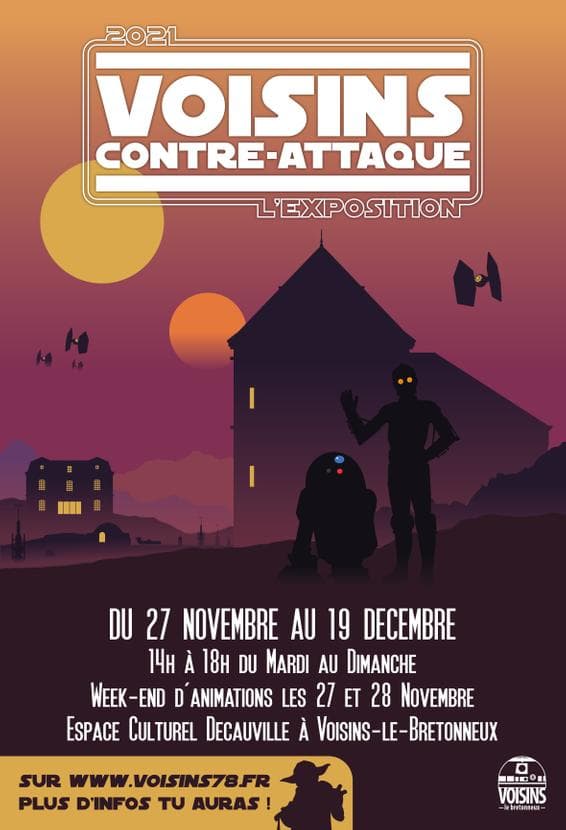 Our eclipse-sculptor had long stopped waiting for it. The message had a particularly explosive effect, nearly coming to an overheat threshold: he was far from being ready!

BODOC was seized by a tremendous excitement, he recorded a very lively positive answer to the droid, that immediately went back tweeting it to his owners; he then jumped from one side to the other of the Workshop, a new idea soon chasing the former - and so on until his emotions could cool down a little bit. Legs shaking, out of breath, a spotlight deep inside the binocles, his gaze was dazed for a while before coming back to his masterpiece. The spaceship! The crash! 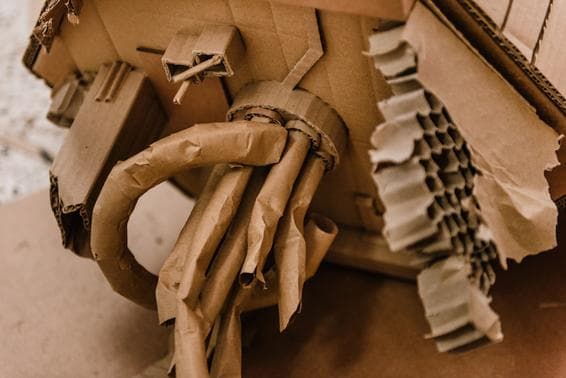 He literally flew to reach the energy deck, unmoved since the accident, with its tubes out in the air. He proceeded to a quick inspection, another among many: this was just in case, he couldn’t tell, a possible something might have changed. Unfortunately, the conclusion remained the same: the machine was unable to take off. The crew! The crew!

This latter reunited immediately, as if each of them had been expecting to be called back any second. The well-known flavor of the most intense phases of the project came back along with Coffeetrooper bringing the usual fuel for all. Gathered around their leader, they were waiting for the details of their mission, still wrapped in a veil of mystery. BODOC looked determined, he had a plan: “I ordered the preparation of a supercargo, it is expected to land in a week exactly. However, getting the TIE Fighter to the Fair could only be done in the puzzle way. Let’s get straight to the job!”

As a single gigantic Wookie, the Bande self-organized and started the dismantling, with much precision and method. The Workshop came back to life as it never was. 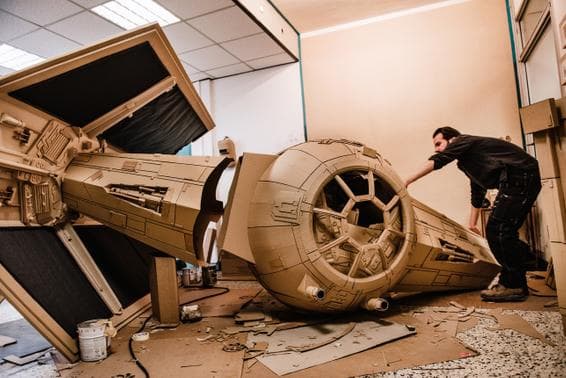 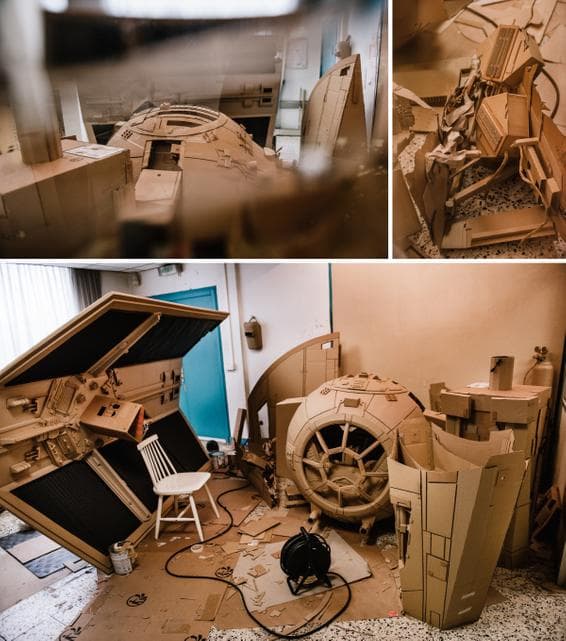 On top of the highest paper-fluted hill, BODOC was monitoring this titan-like construction site, holding a sheet of paper and a pencil. A little earlier, a panic wind went blowing on the team: transport boxes were missing! Using unified-universal packages, of very poor quality on this side of the galaxy, was way too risky. As the dismantling went on admirably without any specific difficulty, he decided to design the boxes by himself.

Wood, cardboard, tarp - unfortunately a lot was missing to proceed. He gathered an expedition group specially commissioned to barter these essential materials with Jawas. Happily enough, his late productivity has generated many objects that could be traded at the best price. 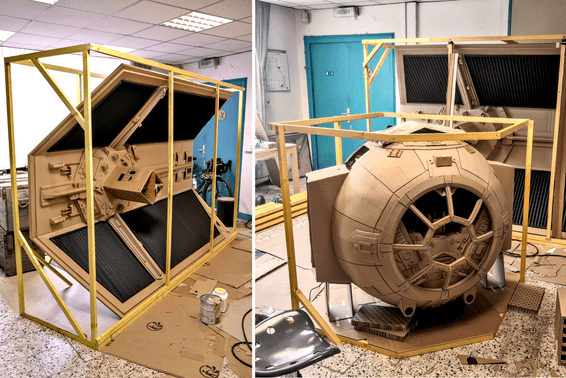 We now have to leave BODOC and his teammates to go on with their adventures, as we can see them already equipped to face the pulp of the cardboard-desert. One thing is sure: should they pass through magnetic wind or electronic rain, Vader’s TIE Fighter will be present at the Decauville Intergalactic Fair in Voisins-Le-Bretonneux.

Don’t wait any longer to inform your time-assistant, make sure the periodic inspection of your space-sliders is not expired, then fasten your harness: let’s meet there, in flesh-and-cardboard!